In Love With These Times: My Life with Flying Nun Records by Roger Shepherd, Harper Collins NZ, 2016

I once asked Kim Salmon to explain the extraordinary flowering of early punk in Australia. I’m from Toronto after all, just up the road from New York. We had a few notable bands in this era but nothing on par with The Saints, Radio Birdman, or indeed Kim’s outfit, The Scientists. He had no idea. But he did offer his own experience as a possibility. The Scientists’ early sound, he told me, was based on what he thought punk might sound like after reading about it in a six month old issue of the NME. There were no punk records in the shops in Perth or Brisbane. Early Australian punk avoided being derivative because no one had actually heard the music.

How’s that for a theory? Isolation breeds original music. There should be some great music coming out of places like Reunion Island then. Well, ever heard of Rene Lacaille? And what about Dunedin on the south island of New Zealand? That should be a veritable wellspring of creativity in music. According to Roger Shepherd’s new memoir, In Love With These Times: My Life with Flying Nun Records, that is exactly what it is.

The Clean, The Chills, The Verlaines, Tall Dwarfs, Sneaky Feelings, and The Bats are hardly household names but they are all associated with the influential ‘Dunedin Sound.’ Roger Shepherd notes that, in the early 80s, Dunedin bands went in for reverb, drone, and jangle (without the jingle). Sound familiar? Fans of LA’s Paisley Underground scene will recognize the same brushstrokes but might be surprised to note that some of these New Zealand bands got there first or least at the same time. Listen to Sneaky Feelings’ ‘For Pity’s Sake’ from the 1982 ‘Dunedin Double’ compilation EP if you don’t believe me. Michael Stipe, it should be noted, credits the sound as a major influence on REM’s early albums.

Roger Shepherd founded Flying Nun Records in 1981 while working in a Christchurch record store. The most interesting sections of the book are in the first few chapters where he describes the excitement of punk’s initial stirrings in New Zealand. He tells a funny story about a friend who in 1976 predicted that the future of popular music was something he called ‘Space Rock’. Three weeks later, a new issue of the NME proclaimed the arrival of punk. Space Rock would have to wait. Hopefully for a long time!

Shepherd almost accidentally started the company by releasing two singles (‘Ambivalence’ by The Pin Group and ‘Tally Ho’ by The Clean) in 1981. He saw a lot of bands and thought that other people should hear them. Compared to, say, Mushroom Records’ Michael Gudinski or someone like David Geffen, Shepherd is a modest fellow indeed. It only occurs to him that he is the owner of Flying Nun when he meets someone in a pub claiming he is instead. It takes him years to get up enough nerve to quit his day job. This is a long way from SST Records being infiltrated by the FBI. But still, these chapters are like snapshots of a lost world in rock and roll. From the four track recorder in someone’s living room to the surprise entry into the national charts, there has never been a time like the pre internet early 80s for tiny record labels.

The gap between mainstream and ‘alternative’ music was far more pronounced than it would be ten years later. The major labels in the 1980s were so powerful and so rich that it was almost impossible to challenge them in the market. Anyone feeling sad about the more recent disruption of the record industry by online piracy might reflect on the effect of this stranglehold on music. Labels like Flying Nun were fighting a real David and Goliath battle with the majors in those days. New Zealand radio was filled with the same bathwater that everyone was subjected to in the early eighties while volunteers packed envelopes with little heard but gloriously creative 45s. Roger Shepherd is far too humble to say so but he, along with his many counterparts all over the world, were revolutionaries. The overused word ‘alternative’ really meant something in those days. When The Eagles Junta was in power, small labels kept us safe!

Speaking of politics, New Zealand in 1981 was experiencing one of its more dramatic moments. A controversial tour by the South African rugby team, the Springboks, divided the country sharply. The protests were enormous and several games were actually stopped. It’s not a overstatement to say that the international attention that the protests brought to the situation in South Africa was a significant step towards the end of Apartheid. Shepherd weaves this story into his own. He doesn’t overdo it but there must be some connection between New Zealand’s birth as a liberal minded nation on the world stage and the sudden appearance of so much great rock and roll.

In the late 80s, Flying Nun Records relocated to Auckland before it was more or less taken over by Australia’s Mushroom label in 1990. Roger Shepherd moved to England where he was eventually pushed out of the label completely when Mushroom itself was taken over. In 2010, he regained control of the label with the help of fellow Kiwi Neil Finn. By this time, Flying Nun Records was recognized in New Zealand as a national treasure that deserved to survive.

Throughout the book, Roger Shepherd seems curiously removed from the music itself. His intentions were, and remain, to distribute music that he enjoys. That said, he says very little about the music. The book certainly has its moments. His descriptions of Chris Knox on stage as the lead singer of Dunedin Sound ur band, The Enemy are vivid and compelling. The story of how Flying Nun inadvertently released a bootleg of The Fall is of interest too. But there is still a book to be written about the ‘Dunedin Sound’. Roger Shepherd is a likeable guide to his label’s history but a scene that can produce so many bands playing so much deep music requires a far more thorough investigation.

Teaser: The story about the stolen cactus with narcotic properties, the enema kits, and the missing ginger ale is sufficiently weird to remind you that we’re talking about New Zealand here, after all.

This is a sad book. Unlike so many rock and roll memoirs, it is not a litany of drug related deaths or missed opportunities. Sonic Youth’s key members, Thurston Moore, Lee Ranaldo, Steve Shelly, and the author of Girl in a Band, Kim Gordon, are alive and well. Their now defunct band has an enviable legacy. They never sold out, never released a seriously bad record, and can rightly claim to be one of the most important acts of the last few decades.

So why is it such a sad book? If you have ever been through a divorce, you will recognize a lot of familiar stuff here. If you haven’t been, well, this is what it’s like.

Throughout the band’s existence, Thurston Moore and Kim Gordon were one of the great couples in rock and roll. They were also the coolest. Kim was intelligent, beautiful, and she played bass, for god’s sake! Thurston was tall, friendly in a shy sort of way, and played guitar like a man possessed by punk rock demons. They shared a loft in New York and were as well connected in the art world as in the music one.

But ultimately the marriage didn’t last. After nearly 30 years, he met someone else and it all ended in an uncool, tawdry fashion. Kim Gordon is not angry. It’s not that kind of book. She’s just sad. Okay, maybe she’s a little angry.

Fortunately, the entire book is not about this sad event. It’s a memoir and a really good one. I read it in two sittings. I had to go to work!

Kim Gordon was born in 1953 which puts her in that interesting demographic of people who were teenagers at the end of the sixties. They were there but not like someone like Neil Young who was born in 1945 was there. On the other hand, they are still boomers with all of that generation’s manic energy and fearlessness.

In 1969, Kim Gordon was going to high school in LA. The Manson Murders would have been discussed over egg salad sandwiches in the school cafeteria. She knew someone who was friends with Bruce Berry, later Neil Young’s roadie and the subject of Tonight’s the Night. What comes through in her story is that Sonic Youth’s groove owes something to their shared understanding of that period. She and Thurston are old enough to have caught the whole ‘break on through’ vibe but young enough to recognize how quickly it could turn into ‘take it easy’. For them the sixties isn’t a nostalgic past but the beginning of something. She mentions Thurston’s love for The Stooges and acknowledges, like everyone else, the importance of the Velvet Underground. As Victoria Williams once put it, they ‘were too young to be hippies, missed out on the love’. Their sixties was not mop tops and flower power but rather Manson girls, riots, and bands like the MC5. She notes that the song, ‘Death Valley ’69’, a collaboration with Lydia Lunch from their early days, is about her own experience of the time.

The No Wave movement in New York also made a significant impression on her. Sonic Youth, in her estimation, are closer to this genre than punk or grunge, which, of course, they, in part, inspired. The deconstructive ethic of the mid seventies New York art scene remained an influence on Sonic Youth to the end.

The story of her teenage years in LA, her move to New York, and her relationship with Thurston, make Girl in a Band a natural companion to Patti Smith’s Just Kids. I hope now she writes another one in the M Train mode. Finishing the book makes you feel like calling her up for a chat. As with Patti, her voice gets in your head and you miss it when you are finished. 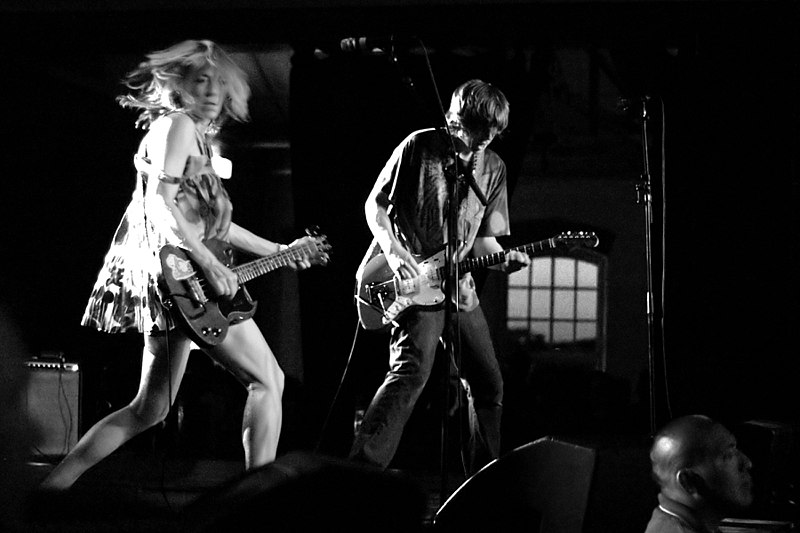 I am not a hardcore Sonic Youth fan. I saw them once, opening for Neil Young, and I have two or three of their albums. The wonderful thing about this book is that it doesn’t matter. She has so many interesting things to say about art, about her friendships with people like Kurt Cobain, her experiences as a woman in the blokey world of alternative rock, motherhood, and her brief time as a fashion designer. I suspect that even readers who had never heard of Sonic Youth would be charmed by her story. That said, fans will relish the detail with which she outlines how certain songs came to be written. She is clearly inspired by the books she reads and she mentions many of them. Keep a pen handy.

Girl in a Band, like Patti’s books, is a breath of fresh air for readers of rock and roll memoirs. In a genre too often dominated by score settling, windy claims of glory, and adolescent self justification, Kim Gordon’s book is, yes, a little sad, but it is also intelligent, readable, and much more than simply a recount of a band’s progress.

Teasers: Her take on Courtney Love. The tour with Neil Young. Kim on The Carpenters.