These Are The Days: Stories and Songs by Mick Thomas, Melbourne Books, 2017

I’m sure Mick Thomas gets tired of hearing this statement:

‘Weddings Parties Anything changed my life!’

But I might be able to impress him with my story.

In 1990, I was living in Toronto and had no interest in Australia. I knew that Sydney had the Opera House and Melbourne was the other city. That was about it. Less than four years later, I was living in Carlton, barracking for the Saints, and knocking back pots of VB at Young and Jackson. What happened?

My cousin Tim invited me to see them one night at a venue called The Siboney Club in Toronto’s Kensington Market. He promised me that they were like the ‘Australian Pogues’. It wasn’t easy to summon that up but I went along. I remember a furious version of Knockbacks in Halifax and the religious experience that resulted. If you’ve seen enough live shows, you’ve had this happen. Something snaps and you become a fan. A really big fan.

I moved to Japan soon after with a 90 minute cassette of their music. Melbourne had begun to loom large in my imagination. Songs like Under The Clocks, Roaring Days, and Brunswick were calling me in a southerly direction. I took a short vacation there in 1992 and walked up Johnson Street singing Manana, Manana. Back in Japan, I played my 90 minute cassette for a woman from Melbourne. We got married and moved to Carlton.

I’ve spent nearly a quarter of a century in Mick Thomas’s city. Weddings Parties Anything ceased trading about 15 years ago but Mick has continued to build on his repertoire as a solo artist. If you stopped at WPA, you’re missing some of his finest moments. Melbourne still figures in his songs and I still see the city through his eyes. That said, my life has begun to drift towards the northern beaches of Sydney of late but the 90 minute cassette will come with me when I finally head up the Hume for good.

Mick Thomas’s book, These Are The Days: Stories and Songs is beautifully presented with sharp photos and reprints of tour flyers and posters. If you leave this book on your coffee table, your guests will pick it up and start reading. They’ll be happy and you won’t have to entertain them. Win win! The photos frame the chapters, each of which is based around a particular song from either WPA or his solo years.

He begins with The Lonely Goth, one of many standout tracks on the Dust on my Shoes album, his first without the band. The song is the kind of story that Mick tells so well. A Goth kid in a small town hangs around the war memorial, shocks his grandmother in the chemist by buying black nail polish, and corresponds with a Goth girl from a nearby town he met at a Marilyn Manson show. If Mick wrote crime novels, he’d be Elmore Leonard. His characters breathe. The listener can not only picture them but can hear them. Recently, I read Jock Serong’s brilliant new novel, The Rules of Backyard Cricket. I kept thinking of Mick Thomas’s mastery of voice. Then I noticed that Serong is thanked at the back of the book. I pictured the two of them sitting together in the Mona Castle Pub in Seddon, not talking but just listening. 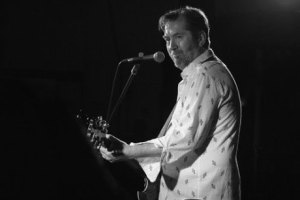 I was particularly struck by the chapter on Sisters of Mercy. This song from Weddings Parties Anything’s Roaring Days album was written in response to a nurses’ strike in the 1980s. In 2012 he was invited to play it for a large group of nurses at a strike meeting in the Melbourne Convention Centre. This chapter might have been a straightforward story about the song and how things never change. But it wasn’t. Instead, Thomas talks about a critique he’d copped in another setting for overdoing the emotional dimension of a song about asbestos poisoning. He was accused of emphasising the victimhood of the sufferers instead of celebrating their fighting spirit. The charge seemed terribly unfair and few singers would have the courage to revisit such a hardline dressing down. Mick then finds himself playing Sisters of Mercy for the striking nurses and choking back tears so as to avoid a repeat of the asbestos song episode. He manages it but only just. My own eyes grew a bit misty reading this chapter. The idea of a singer at a strike meeting in these cynical times is itself moving!

I was going to say that Weddings Parties Anything is the biggest Australian band to have missed out on the big time but that’s a pretty competitive field. They are a cult band but it’s a big cult. For a different sort of musician, this sense of ‘there but not there’ would be unbearable. The story of their song Monday’s Experts is a case in point. Many years ago now, a sports commentary television show called Talking Footy used the song. For most bands this would have been a lucky break and for Mick it should have been some extra cash in his pocket. But the TV station squirmed around on paying royalties, claiming it wasn’t the show’s ‘theme’ so the rules didn’t apply. I used to watch it occasionally. It was the theme. When Mick asked politely if they might be willing to pay for it, they immediately replaced his song with a similar and wholly inferior one. Don’t be a musician, kids!

Fortunately, Mick isn’t a bitter man or least he doesn’t sound like one here. He seems to have enjoyed the ride and never lost the desire to write songs. This doesn’t always happen when I finish musicians’s memoirs but I wanted more. I particularly would like to hear more about the early days of the band. The chapter on Away Away provides a tantalizing chronology but I need details! I think another book is in order but for the time being this wonderful collection will do just fine.

Teasers: The lyrics and guitar chords for every song! Jim Dickinson says that no one wants to hear a short song about cannibalism! A frank discussion of dysentery and marital discord in Turkey!