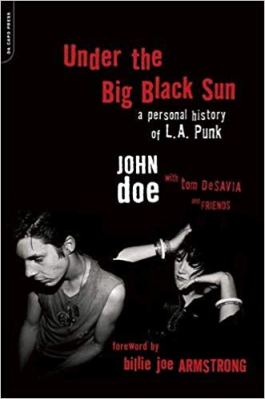 Under the Big Black Sun: A Personal History of LA Punk, John Doe with Tom DeSavia and Friends, De Capo 2016

John Doe, like most Californians, is from somewhere else. So is Exene Cervenka, his bandmate and former spouse. John is from Baltimore, Exene from Florida. Both, oddly, were born in Illinois. Yes, the ultimate LA punk band, X, was formed by two Southerners from the Midwest.

But California has always been more about the idea of California than the state itself. Outsiders, from the original settlers to Jim Morrison, brought their imaginative sense of the west coast with them. The pure products, like Brian Wilson, go crazy. But then, so does everyone else. As James Ellroy says about the city, you ‘come on vacation and go home on probation’.

Under The Big Black Sun is a strange book in many ways. It’s not about X, despite the title it shares with their 1982 album. It’s also not about John Doe, despite his name on the cover and various contributions. He and Exene certainly haunt its pages but are by no means the main characters. It’s not an oral history in the style of Legs McNeill’s Please Kill Me though it contains many voices. There is already an oral history of LA punk from 2001 called We’ve Got The Neutron Bomb. This collection covers some of the same ground but the use of the essay form makes for a very different book. For one thing, Under The Big Black Sun is not exclusively about music. To some extent, it is a snapshot of Los Angeles at the end of a long period of decline. The seventies (and indeed, the sixties) are ending but the former governor Reagan is waiting in the wings for his turn as president. LA will rise in the 1980s and become a kind of staging ground for the cultural shift to neo liberalism and hyper consumerism.

So this is an unfamiliar LA, a city of derelict apartment blocks filled with misfits who are making films, writing poetry, and forming bands like The Go Gos. It’s a night place where a bunch of disaffected kids come together and try something different. All of them had grown up in the Watergate 1970s and the slow death of the 60s dream. Like their counterparts in New York, London, Sydney, and Toronto, they weren’t interested in the bloated rock music on the radio so they made it new. Henry Rollins says that history is filled with moments where someone stands up and says ‘Fuck this. No seriously, fuck this.’ This is what happened in LA in 1977.

Not much stuck. Aside from The Go Go’s, whose moment was brief, none of the bands in this story went very far. X made four stellar albums, followed by a few less stellar ones. The Blasters set a high standard for roots music and promptly broke up. Black Flag are well known but are hardly anyone’s idea of a mainstream act. There is no Blondie, no Talking Heads, no Ramones and no Patti Smith in this story. Instead this is a beautiful moment in rock and roll history that remains preserved by its own obscurity.

X is probably the least known great American band. The combination of poetic lyrics, Exene’s persona and voice, Billy Zoom’s hot rockabilly licks and John Doe’s Cosmic Country soul makes for a remarkably eclectic sound. Some critics have called them the punk rock Doors. But those are lazy critics. Ray Manzarek produced their first four albums and there are occasional references but X is a far more interesting unit. The Band maybe, if you are looking for a 60s equivalent, not so much in sound but rather in vision and depth.

Like all truly great bands, they have their own sound and comparisons don’t really add much. Nor do narrow boxes. I don’t think the punk label served X well but it is possible to see, perhaps, a road not taken for that genre. In another universe, punk might have continued to grow in more interesting ways. I often wonder why so few bands took up The Gun Club’s thrilling use of delta blues and deep south imagery. The vision of punk in Under The Big Black Sun is a long way from the subsequent ‘hardcore’ scene of mid 1980s. In fact, many of the contributors in this book bemoan the end of the initial punk period in LA as it descended into violence, monolithic rhythms, and male posturing.

Punk began in LA as the music of the outsider. There is a fine essay by Teresa Covarraubias of the band The Brat, about the scene in East LA and the contribution of Latino bands like The Plugz – who once backed Bob Dylan on Letterman. Yes, Los Lobos makes an appearance here. They once opened for PIL. What happened? Guess. It involves saliva. Her essay ends, however, on a sad note about the night that a local hall, The Vex, was destroyed by the violent suburban punks who began to dominate the scene in the early 80s. They were, for the most part, white and male. The diversity of the early scene didn’t last long. When the bullyboy skins from Orange Country turned up, women too drifted away from what had been a remarkably progressive moment in rock and roll.

Jack Grisham of the band TSOL gets right of reply here and, in an articulate and fiery essay, outlines the experience of the suburban punks who took the ‘destroy everything’ slogan very literally indeed. In some ways, the book is a series of elegies for a lost time. Chris D. of the Flesh Eaters describes a moment of truth when he walked in on John Belushi and Derf Scratch of the band Fear snorting coke. He resented the intrusion of celebrity culture and the tired inevitability of it all. That’s the moment it ended for him. Others point to the closing of clubs, the death of the Germs singer, Darby Crash, the ‘success’ of X, and the rise of bands like Black Flag.

Other essays, like Mike Watt’s stream of consciousness style story of the band The Minutemen are surprisingly touching and sad. He describes his first meeting with bandmate D. Boon, who died young in a traffic accident:

I met d. boon some three or so years after coming to san pedro, ca, from Norfolk va, when he jumped out of a tree and landed on me in peck park, thinking I was a friend of his, nicknamed eskimo – I told him I wasn’t eskimo…

The sheer oddity of this meeting is a veritable mission statement for the zeitgeist that produced LA punk.

There is much to be discussed in this book and many old albums to dig out while you are reading it. Everybody has periods in history they would like to visit – Paris in the 20s, Greenwich Village in the early 60s, and so on. I’ve added LA in the late 70s. I want to go over to East LA with my new friends John and Exene and catch The Plugz at the The Vex. Afterwards, I want to go to a party at the Canterbury and finish up at the Tropicalia where Tom Waits will stumble out and advise me to stay in school. You had to be there. You wish you had been but Under The Big Black Sun will do nicely as a substitute.

Teaser: Dave Alvin describes what it was like for a rockabilly band to open for Black Flag and describes the various items thrown at the stage that remain embedded in his 1964 Telecaster.

X in the studio with Ray Manzarek in attendance.

Before the Orange Country invasion…