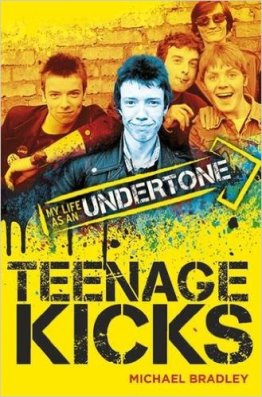 Teenage Kicks: My Life as an Undertone by Michael Bradley, Omnibus Press, 2016

The Undertones’ most famous song, though not their biggest hit, is Teenage Kicks. It belongs to an elite group of timeless rock and roll tracks that perfectly capture adolescent consciousness. I remember hearing it on the radio when I was all of 22 and being gripped by a distinctly regretful tristesse. I would never again experience the pure existential joy of those years. Is it about sex? Sure, but it’s also about the best party you ever went to, and the best band you ever saw, and the greatest night of your life that seemed to just keep going and going until the sun came up and you stood waiting at a cold bus stop, smoke in mouth, still a little stoned, thinking that this life thing was going to be pretty good if the last 12 or so hours were any indication. By 22, I could already feel a sense of disappointment creeping in.

It’s all there in Teenage Kicks, a song that John Peel liked so much that he spun it twice  in a row the night it debuted on his BBC show in 1978. He later insisted that it be played at his funeral. And it was, putting everyone in tears at the close of the ceremony in 2004.

So who were the authors of this masterpiece? They were five Irish lads from Creggan Estate in Derry, the city where the Northern Irish ‘Troubles’ began in the late 60s. The Undertones formed in the mid seventies, only a few years after the Battle of the Bogside, Operation Motorman, and the Bloody Sunday murders. Creggan, incidentally, is adjacent to the Bogside so none of the members were in any way sheltered from the events of the period.

Which raises an intriguing point about The Undertones. As bass player Mickey Bradley reiterates regularly in this fine memoir, Teenage Kicks: My Life as an Undertone, they were not a political band.

The absence of politics in their lyrics in the context of late 70s Derry is a statement in itself. They had all grown up in this ferociously tense atmosphere. Bradley mentions in passing being asked to leave a classroom because a British helicopter was trying to land on his school’s soccer field while being fired on by the IRA. Nobody brushes that off entirely. Thus, the music of this band is political because it rejects sectarianism of any kind for a world of girls, cars, perfect cousins, mates called Jimmy, and good weather. It’s always raining in Derry, or at least it always is when I go, but one of their songs is sunnily titled, Here Comes The Summer. Derry was, like many cities gripped by strife, a socially conservative place. The generation The Undertones represented didn’t ask to be born there. When they rebelled, it wasn’t with anger but against anger, as Eammon McCann notes in the 2002 documentary about the band. The Undertones’ first album is a protest record that counters hate and war with the promise of fun. 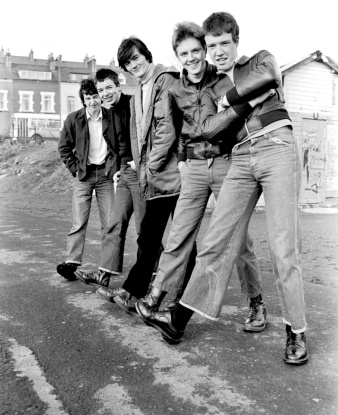 Their stance, or anti stance, wasn’t entirely uncontroversial. While they had a loyal following in their hometown, they were also seen as tall poppies or as they say in Derry, ‘complete wee-ankers.’ The band were regularly heckled and egged onstage there after their initial success. The lead singer, Feargal Sharkey, was a particular target. He had, as a child, been a much decorated choir singer and Feis Ceoil champion. As a member of The Undertones, he had to get around town in a green parka because so many people were spitting at him.

Michael Bradley begins with their early years, playing Stones and Lindisfarne (!) songs to bored boy scouts and fellow students at school. I liked the rendering of the blues idiom in Derry patois. Feargal sings that old favourite, “Shaker Money Mikker”. When they began their legendary residency at the Casbah (Kias-bah, that is), where Derry’s small punk scene coalesced, the original songs began to make an appearance. They caught the attention of Terri Hooley, the legendary Belfast record store owner and label boss, who released the first version of Teenage Kicks. John Peel played it twice in one night and the rest is history.

Except that the history of The Undertones is by no means a standard rock and roll story. Teenage Kicks did not make the top ten but a later single did. Nobody got into drugs, nobody got ripped off too badly, and nobody seems to hold any grudges. If you are expecting the inevitable scene where Feargal Sharkey’s massive ego is too much to bear for the rest of the band, you will be disappointed. He comes across as hard working, slightly eccentric, and amazingly modest in Bradley’s account. They released four albums, toured a lot, ran out of puff, and called it a day. The Replacements, they aint.

One of the many unexpected pleasures of this band is their second album, Hypnotised. The first self-titled record is classic early punk rock, beautiful in its own way but still in the thrall of the Ramones, Dolls, and so on. Second albums aren’t easy for any band but perhaps even less so for this generation of punk pioneers. The moment was passing quickly and it was often hard for these groups to find a way forward. Not so The Undertones. Without abandoning any of the energy of the first release, the songs were better written and better played. My Perfect Cousin (their only top ten single), Here Comes Norman  and See That Girl are just some of the highlights of this gem.

Michael Bradley tells their story with humor and warmth. There is no score settling, no ridiculous claims of utter originality, and no pretense about the band’s place in rock and roll history. If anything, one is left wondering if he realizes just how good The Undertones were. The early scenes in Derry are hilarious. It’s essentially The Commitments in a war zone but even Roddy Doyle couldn’t have come up with the scene where they first encounter Feargal singing – in blackface!

The account ends at the precise moment in 1983 when they are late for their final gig in Kildare. Feargal went on to have several hits before becoming an important figure in the world of public policy around UK music and the arts. The guitarist brothers, John and Damien O’Neill, formed That Petrol Emotion and had several hits in the late 1980s. The author, Michael Bradley, became a bike courier. The band reformed without Sharkey in 1999 and continues to this day with another Derry native, Paul McLoone, on vocals.

I saw them in Derry a few years ago. The hall was filled with ageing punks, mods, and skinheads. In a nearby pub after the show, I sat at a table with a group of original fans all now in their 50s. The talk was of old friends, legendary parties, classic gigs, and that night when, you remember…

Teaser: A series of scenes when the inscrutable Derry world view combined with the impenetrable Derry accent proves challenging for the people they meet in the outside world. Look at the cover of Hypnotised for a preview of what happens when these punk rock hobbits leave the shire.