Memphis ’68: The Tragedy of Southern Soul by Stuart Cosgrove, Polygon, 2017

The original Memphis is 15 miles south of Cairo in Egypt. It was the capital about three thousand years ago and is now a popular stop on the tourist trail. Like many ancient cities, it was filled with temples dedicated to an array of deities, some well known to this day, some obscure, and and and some whose sole memorial is a name engraved in a barely translatable language.

Its namesake in Tennessee is a site that predates European settlement by at least a millennium. The Chickasaws had been there for hundreds of years when Hernando De Soto came by in the 1500s. They were still there when Andrew Jackson founded the city and named it after the Egyptian place 300 years later. It was clearly an appealing place to settle, that famous bluff walked by Johnny Cash’s lost love, raising a few eyeballs before she continued down the Mississippi River. Like the original Memphis, its economic life was based on a large river and its fortunes have always been tied to it. In the ancient city, the number of different temples for different gods is probably explained by the proximity to the river. The population was always in flux and visitors came and went, leaving behind items of their cultural baggage.

The Egyptian Memphis lost influence through the usual series of economic and political changes that constitute history. Memphis, Tennessee can also seem like a city of the past. The name evokes a much earlier period in American history. Riverboats, jug bands, WC Handy, Furry Lewis, Sun Records, and Otis Redding come to mind. Only New Orleans tops it as a staging ground for the old romantic America. But here’s an argument starter: In terms of diversity and influence, Memphis is by far the most important musical hub in America. Blues, RnB, Rockabilly, Soul, and Rock and Roll all thrived in this city. Try to imagine Elvis coming from any other city in the US. It’s not easy, is it? 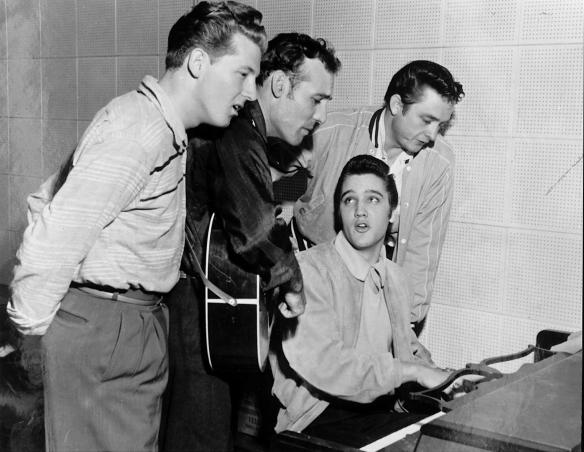 Stuart Cosgrove’s latest book, Memphis ’68: The Tragedy of Southern Soul documents the year from which many believe the city never fully recovered. Otis Redding’s death in December 1967 has long been acknowledged as the beginning of the end for Stax Records. The assassination of Martin Luther King on the balcony of a Memphis motel four months later devastated the whole country and seemed to suck the life out of a town already reeling from the first stirrings of the globalized neo liberal economics that continue to depress the American South. Martin Luther King was in town to support a strike by the city’s sanitation workers. Memphis had a long history of corrupt local politics, and a longer history of racism. The term segregation only begins to describe a city so divided that each community barely realized the other was there. The sanitation workers were invisible despite providing an essential service. Martin Luther King made his famous ‘I have been to the mountaintop’ speech at a rally for them the day before he died. 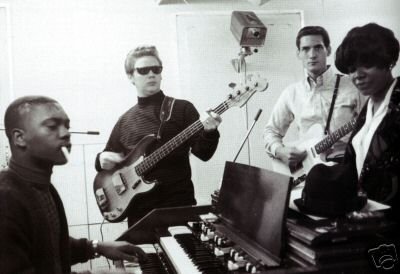 Strangely enough, the situation in wider Memphis was not reflected within the walls of 926 East McLemore Ave. Stax Records was, briefly anyway, a complete anomaly in the city. It is one of the great ironies that the white guitarist, Steve Cropper, wrote In the Midnight Hour with Wilson Pickett in a room at the Lorraine Motel where Martin Luther King was murdered three years later.  I don’t know how many different accounts I have read of this period at Stax Records but I’m always moved by the story. There is something fairytale-like about this small space in Memphis where music was important and race wasn’t. It didn’t last, of course, but for a moment there, right under the noses of the racist power elite in Tennessee, a wonderful model for desegregation was developing. 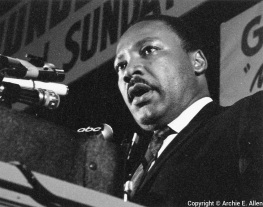 Memphis ’68 is the second in a proposed trilogy that includes last year’s Detroit ’67 (reviewed here in April 2016) and next year’s Harlem ’69. Cosgrove is a great storyteller and this book is a deserving winner of the 2018 Penderyn Prize for books about music. Though it is, broadly speaking, a social history, music is at its centre. Cosgrove has a deep and longstanding love of soul music that he combines with an encyclopedic knowledge of the genre’s artists, songs, and labels. Because of the dramatic nature of MLK’s assassination and the resulting riots, he faced a real challenge here telling this well-known story in a fresh way. His account of The Invaders, a Memphis version of the Black Panthers that included at least one Stax musician in their ranks, adds another layer. The month-by-month assessment of 1968 in Memphis is done through the stories of both musicians and ordinary citizens of the city. As with his Detroit book, the effect is immersive and engaging. 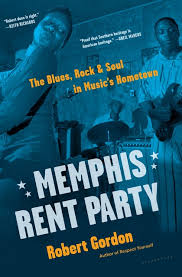 Robert Gordon is a Memphis native who was seven in 1968 and remembers seeing tanks on the streets after the assassination. His love for his hometown is well documented in books like the sensational It Came From Memphis and Respect Yourself: Stax Records and the Soul Explosion. He has also made a number of films about Memphis musicians. Blues fans will be familiar with his biography of Muddy Waters, Can’t Be Satisfied. All of his books are on the syllabus. You must read them.

His latest is a collection of articles, reviews, liner notes and unpublished pieces called Memphis Rent Party: The Blues, Rock & Soul in Music’s Hometown. I read it immediately after finishing Cosgrove’s book and it makes a fine companion. If the heady tale of Memphis’ most dramatic year is dinner, this is a rich dessert followed by lovely whiskey.

Gordon is, by his own admission, a member of the Peter Guralnick school of music writing. His knowledge of music is deep but the musicians fascinate him too. These pieces put you at the table with the subjects. The article on Jeff Buckley’s final days is a case in point. The singer’s tragically short career has been dissected and rehashed many times but this piece is revelatory. Buckley was searching for something in Memphis and Gordon was fortunate enough to spend some time with him while he made his last recordings and absorbed some of the musical atmosphere of the city. It’s a poignant article. Honestly, while I was reading it, I felt the same way I did when I heard he had died that day in 1997. I also went running to my CD shelves to find my copy of Sketches of My Sweetheart the Drunk. You will too! 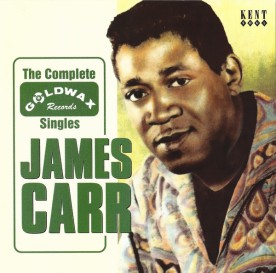 But most of the pieces here deal with Memphis musicians. James Carr, a soul great that has never had anywhere near the recognition he deserves, is profiled. His story is another sad one. He recorded the original, and by far the best, version of Dan Penn’s Dark End of the Street on Goldwax Records in 1967. It should have set him up for a lifetime’s career in music. Instead, he battled terrible mental health problems and substance abuse issues until his death in 2001. Gordon’s interview presents him with the almost Lear-like pathos of a delicate soul unraveling. This is something of a pattern in these essays. The brilliant Jazz pianist Phineas Newborn Jr suffered numerous nervous breakdowns after his initial success in the late 50s and even had his fingers broken in a bar one night. Gordon interviews his mother here and profiles his brother Calvin. Jerry McGill, a Sun Records recording artist and the subject of one of Gordon’s films, is another hard luck story albeit one with a mildly happy ending.

The spirit of Alex Chilton hangs over many of these tales and he is the subject of a long meditation towards the end of the book. Like Flies on Sherbert, an album produced by another Memphis deity, Jim Dickinson, is either a drunken mess or a sophisticated deconstruction of Memphis music, depending on your perspective. Gordon is a fan and maintained a long, though not always friendly relationship with the mercurial singer. Chilton’s sometime collaborator Tav Falco is also profiled here. Falco’s story is a reminder of the vibrant arts scene in Memphis in the 70s.

It would be tempting to finish by saying that, like Memphis in Egypt, Memphis Tennessee is now simply an open air museum that trades on past glories. While there are many temples to old gods – Graceland, Stax, Sun Records, and Beale Street, I suspect that Memphis can’t be consigned to ancient history just yet. Somewhere in those streets, the next Alex Chilton or James Carr or Steve Cropper is practicing guitar and dreaming about writing another chapter in the musical history of this remarkable city.

Teasers: Martin Luther King was talking to a musician just before he died. He was making a request. Find out which song in Cosgrove’s book.