Imagine a genre in popular music in which the most famous band is made up entirely of high school kids with virtually no musical experience. Now imagine that this band only ever plays a handful of gigs, never releases any records, and disappears after a few months. Then imagine that the genre more or less disappears from the public imagination while the band changes it name and becomes a cornerstone of popular culture. It doesn’t make sense, does it? Or maybe it does if you’re talking about skiffle music and a band called The Quarry Men aka The Beatles.

But let’s try another scenario. It’s 1954 and a group of young musicians are struggling to finish a recording session. One of them, the guitar player, picks up his guitar and starts mucking around with an old blues song. The producer hears something he likes and asks him to play the song again, this time with the band. The result is, in today’s parlance, a game changer. Popular music takes a sharp turn. The cultural landscape of the entire nation shifts.

Sounds familiar doesn’t it? Elvis, Scotty, and Bill messing around with Arthur ‘Big Boy’ Crudup’s That’s Alright Mama and managing to invent rockabilly. But in the same week, far away in England, an almost identical scenario took place. In this case, the guitarist was Lonnie Donegan and the song was Rock Island Line. Rockabilly and Skiffle, distant cousins, born within hours of each other. Why? History is where geography and chronology meet. What was happening in Memphis that spawned rockabilly? What was happening in London that tossed up skiffle? The music historian, Peter Gurlanick, provides the answer to the former in his recent biography of Sam Philips. In a new book, Roots, Radicals and Rockers: How Skiffle Changed the World, Billy Bragg – yes, that Billy Bragg – tells the lesser known story of the latter.

I’m quickly coming to the conclusion that rock and roll historians need to start talking about jazz and that jazz historians need to find a place for rock and roll. Not long ago, I had another look at The Rolling Stone Illustrated History of Rock and Roll, a book that I read endlessly as a teenager. The early chapters make a lot of noise about blues and country but seem to skim over jazz. Duke Ellington, it should be recalled, always regarded rock and roll as a form of jazz. And he liked it! One of the many intriguing points about skiffle is that its basis wasn’t in folk or country but in trad jazz.

The English trad jazz story is itself fascinating and Bragg does a great job telling it. It all started with a record collector named Bill Colyer who went off to the army in the 1940s and came back to find his little brother Ken listening to his records and playing guitar. Colyer’s records, and this is critical, were a mix of early New Orleans stuff like King Oliver and Jelly Roll Morton, along with people like Blind Blake. In the mind of these fans, blues was at the heart of the jazz they loved so why wouldn’t they listen to Blind Lemon Jefferson. Naturally, they recognised that rural blues artists, songsters, and jugbands like Gus Cannon’s Jug Stompers used different instruments but to them it was all part of the same story.

When Ken Colyer and similarly inclined folks like Chris Barber began to play early jazz live, they broke up their sets with ‘breakdowns’ where they would pick up guitars and play songs by Leadbelly, Big Bill Broonzy, and Lonnie Johnson (an influential musician who deserves some kind of revival). Robert Johnson had yet to be rediscovered at this stage, as incredible as that seems. The breakdown sets allowed them to rest their tired embouchures and introduce other songs to their audiences. As so often happens, the other thing became the thing. These sideshows brought people like Lonnie Donegan and Alexis Korner out front with their guitars. As rock and roll landed on the shores of England, guys out front with guitars looked like money to the boys on Denmark Street. The age of skiffle had arrived.

Why didn’t they just call it blues? Billy Bragg addresses this in the book. Apparently, when asked for a name for the members of his brother’s band that had just recorded some guitar based music – Bill Colyer said, ‘The Ken Colyer Skiffle Band’. Skiffle is an old American word for rent party so the association with good times and gutbucket blues is there. But apparently he just couldn’t bring himself to use the word ‘blues’ to describe English music. It offended his sense of authenticity. I wonder what he thought of the Stones’ first record.

Speaking of The Stones, did you catch the name Alexis Korner back there? Yes, it’s the same guy whose Blues Incorporated band featured a drummer called Charlie Watts with guest stars, Brian Jones and Mick Jagger. He began his musical career replacing Lonnie Donegan in Ken Colyer’s Jazzmen and was an architect of the skiffle sound. Later, it was his collaborations with Cyril Davies that laid the foundations for British blues. Now that’s a career!

Billy Bragg’s point in this book is devastatingly simple and very difficult to dispute. By 1964, British acts dominated the Billboard charts in America. From The Beatles through to Billy J Kramer, every one of these acts had begun as a skiffle band. All except Petula Clark. She didn’t start as a skiffle band. Bragg’s contention is that when Lonnie Donegan had a big hit with Rock Island Line, a whole bunch of kids were hit by two revelations.

The first was that a lack of talent didn’t disqualify you from music glory. This isn’t to say that Donegan wasn’t talented but he played three chords on guitar and told his story in a voice that would have sounded untrained and raw to kids raised on crooners. It was, as Billy says several times, a similar phenomenon to punk. No suburban kid with a guitar aspired to form a band like ELO. The Clash’s music, on the other hand, sounded like the kind of noise you and your friends could aspire to making without being doomed to certain failure. Of course Jeff Lynne of ELO was himself one of those kids who saw Lonnie Donegan on television and thought, ‘I can do that!’ So there you go. 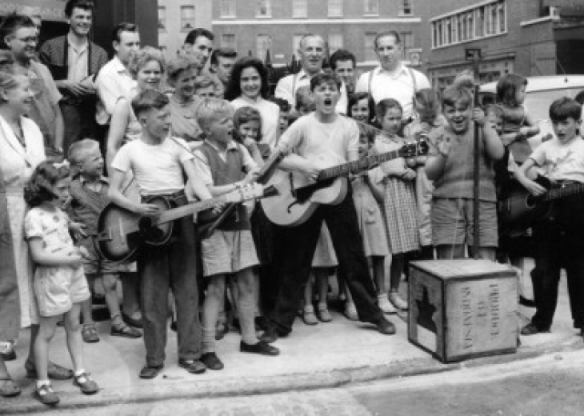 The other revelation was that English kids could sing American songs. This is significant because without this understanding, it is unlikely that the British blues boom would have occurred in the same manner. It was as though Lonnie Donegan gave a whole generation permission to sing whatever they wanted to sing. And, of course, British blues became a genre in itself that, in turn, shaped the future of American blues.

It was observations like this that Billy Bragg caused a minor storm with an article in The Guardian about skiffle in 2013. He was trying to suggest that ‘Americana’ music could be traced back to England. His evidence had to do with The Animals’ decision to record House of the Rising Sun and the impact this had on Bob Dylan. The real point he was making was that skiffle has been unfairly written out of rock and roll history. The article was typical Bragg fare, earnest and provocative.

Lonnie and Buddy get along better than Billy and Pokey

Nonetheless, this earnestness provoked Pokey Lafarge, and he took Billy Bragg to task in a Ted talk. He said something to the tune of: “Don’t let people like Billy Bragg tell us that our music came from Britain.” Billy replied on social media that he had said no such thing. At the Womadelaide Festival of 2014, Billy approached Pokey backstage and suggested a beer and chat. Pokey, still affronted, turned him down. Billy then suggested that they have an exchange of views in print. Pokey sourly walked away, leaving Billy and his olive branch to wilt in the South Australian heat.

Billy Bragg is an old punk rock warrior and a sort of George Orwell style English patriot. Pokey, on the other hand, sounds like he needs to update his manners software.  He also seems to have missed the deeper irony of the argument. The musical exchange between the UK and Ireland and America is ancient. The ‘old timey’ music that makes up some of Pokey’s repertoire can be traced back to the Ulster Scots and others who arrived in America in the late 18th, early 19th century. To Pokey and everyone else, I recommend the book, Wayfaring Strangers by Fiona Ritchie and Doug Orr. It’s a brilliant antidote to any overly nativist ideas about music history. 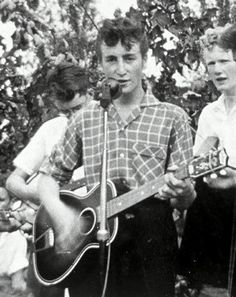 If you’ve never listened to skiffle, Billy presents the genre in great detail, picking out the notable from the forgettable. Ever wondered about the song ‘Maggie Mae’ on The Beatles Let It Be album? The original was the biggest hit of a Liverpool outfit called The Vipers. One of the issues for skiffle bands in the studio was the tendency for older producers to top up their sound with strings and other embellishments. The Vipers, fortunately, found a young producer who correctly noted that their rawness was part of their appeal. He simply recorded them, live on the floor. That young producer would use a similar strategy with another band from Liverpool a couple of years later. His name was George Martin.

This is a top read. Billy Bragg is a very capable writer who has done an enormous amount of research. He covers a lot of ground here and, setting skiffle in context, he has provided a comprehensive history of British popular music, in general, between 1945 and 1960. This is also a social history that made for very interesting reading as the British election unfolded. Skiffle, the rise of rock and roll, John Osborne and the Angry Young Men, Pop Art, and the CND movement are all part of this story. And Billy Bragg, as his fans know, has exactly the right voice for the job.

Teasers: A possible explanation of the line, ‘Look at those cavemen go’ from David Bowie’s Life on Mars; the possibility that this book will get you listening to British trad jazz. It’s good stuff. Ken Colyer, Chris Barber, Acker Bilk! Legends!

Billy Bragg and Joe Henry recently collaborated on an album called Shine A Light. They recorded the whole thing live in railway stations and hotels as they traveled southwest from Chicago to LA on trains. Great album to listen to while reading the book!

2 thoughts on “A Mighty Fine Line”