The Record Store of the Mind by Josh Rosenthal, Tompkins Square Books 2015

Ray Robertson, a fine Canadian novelist, told me about Willis Alan Ramsay on New Year’s Eve 2010. He said that I needed to hear the self titled album that this man recorded in the early 70s. I like that sort of advice so I tracked it down. The album exceeded even Ray’s glowing description. It is a serious classic and something of a lost one, despite containing the original versions of Muskrat Love (Yep, that one) and Satin Sheets.

Years ago my old friend Mike told me that I should hear Ronnie Lane’s One for the Road album. Need I say more?

I’m not sure what constitutes good taste in music but whatever it is, these two have it in spades. Mike has been pointing me towards great albums for 30 years and Ray hasn’t missed yet with his picks.

Josh Rosenthal, the author of The Record Store of the Mind, is a guy that can recommend a few good albums. His book reminds of me of an extended version of an email that might come from Ray or Mike. The first chapter is about a singer called Ron Davies. Ever heard of him? You know one of his songs. Bowie covered It Aint Easy on Ziggy. Yes, I always just assumed it was a Bowie original too. Ron Davies is someone worth hearing. His album Silent Song Through The Mind is astoundingly sharp.

What about Tia Blake, a teenager who recorded exactly one haunting folk album in 1966? Or Bill Wilson, who turned up at Bob Johnston’s place in 1973 demanding to record an album? Bob called up his usual session guys – McCoy, Buttrey, Charlie Daniels, etc – and recorded Bill who then disappeared. Great album – Ever Changing Minstrel – and incredibly rare. Josh Rosenthal picked it up for a quarter in a record store in Berkeley and released it on his own label, the Grammy decorated Tompkins Square Records.

Josh has had the career we all dream about on our way to work on Monday morning. He worked for a bunch of record companies in his 20s and 30s, met everyone, saw tons of shows, acquired crates of great albums, before starting his own niche label in his early 40s. I know. Makes me sick too. 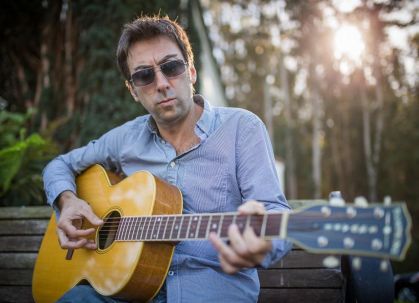 Josh Rosenthal, author of the book and owner of Tompkins Square Records

But there is nothing smug about Josh or his book. He loves a lot of stuff that wouldn’t endear him to the guy with the beard going through the crate beside you at the record store. Eric Clapton’s Just One Night, an album that sounds like the bath running to me, is a big one for Josh. I listened to it again. Still doesn’t grab me. But Harvey Mandel does, and Josh has some good advice if you are ready to dive into that pool.

This book is an autobiography of sorts told in a series of artist profiles and record reviews. It ends with a list of albums he believes to be notable. Some are very obscure, some just a little obscure. You will have some of them and you will be curious about the ones you don’t. Thank God for YouTube and streaming services.

I think a lot of us have a lost album or two that we like to offer up when we meet a fellow music obsessive. Josh has plenty. Read it, keep a pen handy, and let me know what you think of Robert Lester Folsom.